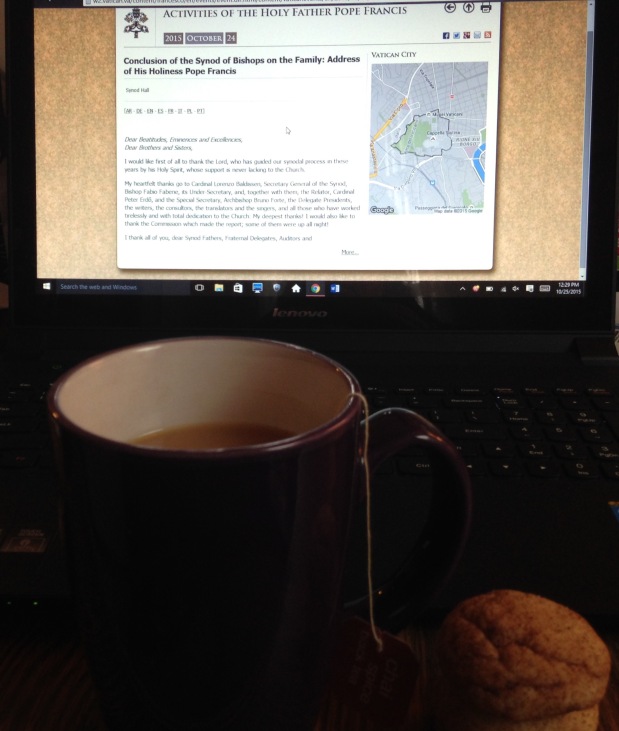 Yesterday was a long day. I did everything to stay off of Twitter and out of the debates that flared up as soon as the text of the Pope’s closing remarks to the Synod on the Family were released. Okay so I did maybe fire off a single tweet that the “great Catholic leaders” described as “shaping Church teachings” by one conservative Catholic Twitter user actually translated to “men, ordained or not” and pointing out that, ‘Faithful women religious were not given a vote.”

But that doesn’t mean I haven’t been reading. I read the Pope’s closing statement. He spoke of those who would indoctrinate dead stones to be hurled at others and of those who would hide behind Church teaching in order to judge with superiority. Even as far removed as I am from the Church, I love Pope Francis. I love that he calls out the superiority, superficiality, pomposity, and arrogance of the same men who elected him. 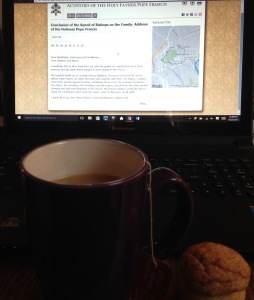 I’m still waiting for the English translation of the full 94 paragraphs of the final document from the Synod. But I have read the paragraphs that have been made available thus far. The language on divorce, remarriage and the internal forum will garner most of the attention from the press, followed closely by the language on LGBT persons and their families. None of the above are really a big change. Although the internal forum has long been a close-kept Church secret, it really shouldn’t be quite so hush-hush. I think it’s about time to publicly answer the question of whether the Church trusts her priests to form consciences and guide individual discernment or if it does not. And if it does not, why not?

The paragraph that broke my heart was Paragraph 27, the paragraph that dealt with women. Once again the men at the top have reiterated that, above all, the value of woman lies in her role as a mother. The language which could have focused on the violence against women as a violation of their inherent dignity as beloved daughters of God was instead focused on threats to motherhood particularly through forced sterilization or forced abortions. The Church fathers irresponsibly squandered a tremendous public opportunity to speak out against the physical, emotional, and verbal abuse millions of women face every single day. Many women suffer at the hands of the very men who have sworn to love, honor and cherish them. Until death do us part for many is a not a promise of a long and fruitful marriage but rather a sincere hope that the death will come quickly and thereby end their suffering. But there are also many woman and girls who will suffer violence and abuse outside of marriage. These millions of women deserved more than a single line buried in a paragraph focused mainly on violence as a threat to the role of motherhood.

I supposed it could be said that I can’t blame the Church fathers for their lack of insight. They are, after all, men surrounded only by men, taking advice almost exclusively from men. But I can, and soundly do, blame them for choosing to remain ignorant. Non-ordained religious brothers had voting rights at the Synod. Their status within the Church is that of layman. Or a laywoman. Or a religious sister. But no woman was allowed to cast a vote. Not one. The refusal to allow women to fully participate in these discussions and the drafting of these documents is also a refusal to admit to the pastoral realities that exist in the lives of women in the Church.

The Church refuses to ordain women. While I may vehemently disagree with their scriptural interpretations, they have their traditions and doctrines that reinforce their reasons for this refusal. But what, exactly, are the reasons why the Church refuses to hear from women at all? How does one legitimately claim the title of Father but ignore the cries of their daughters?