After a very crazy two weeks, I finally had a weekend that was relatively quiet.  Well quiet except for the two papers I had to write. One had to be an evaluation of a colloquium with Dr. Tina Beattie centered around the book Catholic Women Speak and the Synod on the Family being held in Rome and tying together the topic of the colloquium with the early civilization class I’m taking, which is a bit of stretch. The other is an exegesis on priestly garments in the book of Exodus. Both of these topics are precisely the kind of thing I love to sink my teeth into so I wasn’t too worried about getting them done. 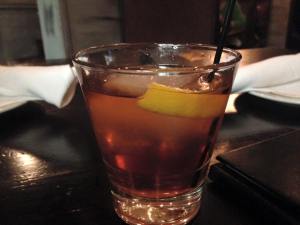 Did I mention I had a quiet weekend coming up?  So of course that meant I had time to meet up with friends and have a bourbon Friday night. Of course, one bourbon turned into two. And of course, I decided to be a bit adventurous and instead of sticking with my usual neat bourbon, I had a delicious twist on an Old Fashioned that involved a fair amount of sugar. Come Saturday morning that made for a wicked hangover headache.  Okay. No big deal. Nothing a big breakfast and some time in the sunshine can’t fix. Except I made the mistake of going on Twitter. I retweeted a post from about faith and trust. Just an FYI, tweeting anything with #faith paints a laser target on your account for bored atheists. And as my longtime readers know, I never can just walk away from a good Twitter discussion.  Instead of nursing my hangover by closing my eyes and soaking up sunshine in my car at the beach, I was on Twitter defining faith.

Naturally by the time I got home on Saturday afternoon, it was nearly two o’clock and since I had two papers to write, I had stopped at the store to pick all the makings of a lasagna. Cooking and writing are inexplicably tied together in my brain. I worked out the outlines to the first paper in my head as I prepped and layered what turned out to be a fantastic lasagna. All the while I kept up with the discussion of truth, falsity, faith and judgments.

Why? Because I clearly need a life or a hobby or a Twitter intervention or perhaps all of the above. I also need a couple of Advil because I tend to bite my lip when I think and after a while it makes my jaw hurt which only added to my bourbon headache. But all that nonsense aside, I work stuff out as I write. Crazy as it sounds to get dragged into a discussion of faith with someone who doesn’t believe in God, knowing neither of us has any real hope of dissuading the other, it’s really not a complete waste of time. It is a lot more work to stop and consider how to answer that question in light of the questioner’s nonacceptance of religion as a whole.

It’s so easy to pretend that ours is the only belief in the world when we only spend time with people who think and believe the same things we do. We get lazy. So when someone throws down the question, “You say you don’t make a judgment of truth for other religions compared to yours. But certainly you had reasons not to choose. How did you decide the truthfulness of [other religions] was less than that of Christianity?” the easiest thing in the world would be to put the phone down and add some more cheese to the lasagna and forget to answer the question.

The time spent answering hard questions on why I believe what I do is always time well-spent. It may or may not make a difference to the one asking the questions, but it always expands my own understanding to formulate the answers.  What did I answer? To paraphrase: there is some piece of a greater truth to be found in every religion I have studied. Ultimate truth is beyond any human codification system. I found my truth in Christianity as it most closely matched my experiences of God.  And that is where it becomes faith rather than logic.