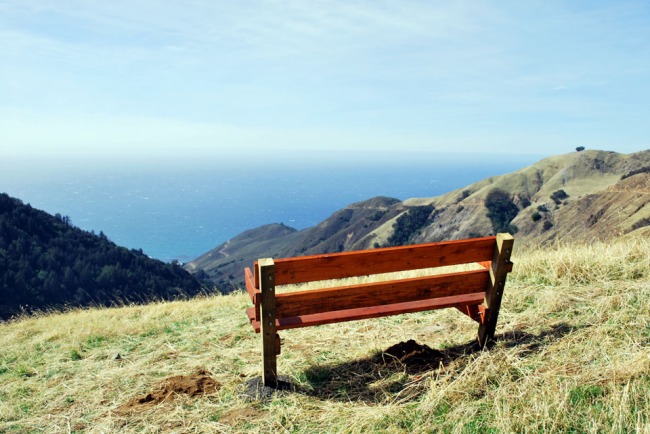 One of my friends posted a photo of an empty bench on Facebook.  The question posed was simple enough. If you could sit on that bench and talk to anyone, past or present, for one hour, who would it be?

Jesus?  We talk all day every day already – would be nice to see His eyes – but that day will come soon enough.

My dad?  The hour would be nice but I don’t think I could say good-bye again. The first time was hard enough.

My sister?  I wouldn’t change a second of our last conversation.  I didn’t know that good-bye would be our last and I have a slew of questions I’d love to ask her but ultimately her journey was hers and mine is mine so those answers really wouldn’t change much.

So who would I most want to talk to?

Not 19 when I threw up my hands at God and told Him to take a hike.

Not 21 when I was getting ready to marry.

But 16, when I really started to listen to and even believe those voices that said I wasn’t good enough.  Would I tell myself not to do some of the incredibly stupid things I did or maybe do the things I was too afraid to do at the time?  Nope. I learn best when I learn the hard way and I wouldn’t be who I am now except to have traveled the road I have.

That English teacher who told you that you can’t write is an idiot.  Don’t listen to him.  Listen to the dozens of others who say otherwise.

That nun who keeps trying to get you to talk about Dad – she actually does care.  You might want to talk to her.  At the very least, stop yelling at her.

That nun who told you to always question authority, she has your back.  It really is okay to trust her.

It’s okay to admit you need help and to ask for it. It’s not a sign of weakness. It’s a sign of strength.

All those days when you feel like you’ll go crazy or die if you don’t sneak off to be by yourself for awhile? Sneak off. Your gut is right. You need time alone with God to heal.

You’re going to get really, really pissed off at God. Go ahead and scream at Him. No lightning strikes – well at least not up to 41 anyway. If that changes, I’ll let you know.

That big long list of stuff you’re so afraid you won’t be able to get through? You will get through. Not without a lot of tears but tears won’t kill you. Honest, they won’t. It will get messy. It will get hard. It will get very, very ugly and you will be scared out of your mind on more than one occasion. But when it gets messy and hard and ugly and you’re convinced you’re about to break, you’re going to dig down deep into a well of grace and strength that you don’t even know you have and you will come out the other side of hell. Brush the ashes off. Don’t be ashamed of your scars. They’ll tell your story more eloquently than any words you’ll ever find.

I know you don’t believe me but God knows what He’s doing. More than that He knows what you’re doing and He’ll make that work in His own weird way of doing things. Just accept the fact that you can’t possibly screw up beyond His ability to make it work in the end. Life is hard enough Sweetheart, don’t make it harder.

And what does Me at 16 think of all this? She thinks I’m crazy as hell and she’ll do it all the hard way anyway. Because she is, after all, Me and I wouldn’t have it any other way.

One thought on “The Empty Bench”