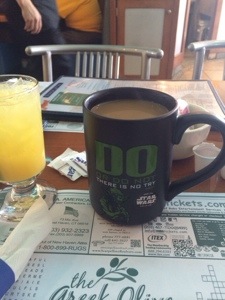 I don’t know why it caught me so off guard. I mean think about it, God showed up in a barn as a baby when everybody looking for the Messiah expected a great warrior. So it’s not like I don’t know He’s got that weird element of surprise and He does love to use it. But still…

Yesterday morning, I had coffee with God. Yes really. Face-to-face. Sat down and had coffee in a restaurant in New Haven with God, who decided to show up as Andrew, a large raucous gay black man on his third screwdriver at 11:00 in the morning. I wasn’t even there to meet him. I was there to see my best friend John who was home for one last time and his friend George, who had made the trip with him. Andrew just happened to be with them when I got to the restaurant.

Breakfast dragged out until well past lunchtime. We lingered long over coffee. Well, no, George and I lingered over coffee while John and Andrew knocked back vodka and orange juice while joking with the waiter in Spanish. And then suddenly, it was just me and Andrew. George had gone back to the hotel room to finish packing. At Andrew’s suggestion, John disappeared for an extended cigarette break.

This guy who thirty seconds earlier had been making raunchy jokes suddenly got quite serious and quiet. His face and his eyes softened and changed, almost like they were lit from the inside. “Girl, we need to talk. You need to listen to me. You are a beautiful woman and I don’t just mean on the outside but inside too. You radiate beauty out of your face and you don’t even see it. You been hurt. I can see that too and it just made you stronger and kinder and more beautiful. Don’t you go wall yourself off because some men treated you bad. There’s good men out there still. You’ll see. You will find someone who will love you right and treat you the way you deserve. You just got to be patient and you don’t give up and you don’t lower your standards for no man.”

It went on from there. Dating guidelines, boundaries, and so on but you get the idea. Okay so he’s not the first person to tell me any of this. I’ve heard it. Over and over and over and over again. My mom, my friends, my therapist, spiritual director, my confessor, they’ve all said it to me these last six years. But this was different. It was unexpected. It was from a stranger. More than that, it was just a plain flat out strange situation. Hanging out in a restaurant watching two men get drunk and loud before noon is so far outside my comfort zone it’s not even on the same map. And I guess that’s what got me. I didn’t know what to expect. I didn’t know what defense to put up. So I didn’t. And He used that and He got through.

So then what? John came back. Serious conversation over. Light in the eyes was gone and the raucous conversation started anew like this little talk we’d had never happened. But it did and it blew past every single one of my usual defensive walls. A few months back, Deacon Ron mused that it seemed to him that I needed to meet God with some skin on Him. Yesterday, that’s exactly what happened and it was nothing like what I would’ve expected.